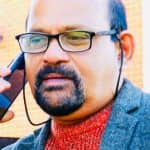 Boolokam.com was founded by James Bright in June 28, 2009. He is working as a psychiatrist in United Kingdom. He wrote screenplay for the film One Day(2015) and he was one of the producers of the film Vadhu Doctoranu(1994).

Soon after the start, the site captured the attention of bloggers and they have started adding their content into the site. Anybody was allowed to publish their content. Boolokam is the first citizen Jouralism website in India.

Boolokam was started as a blog and it was named boolokamonline in the early days. It was later renamed as Boolokam.